This is my twenty-fourth participation in the Weekly photo challenge. This week’s theme is “street life.”

It’s that time of the week again -the time where I haven’t posted anything for the Weekly photo challenge and I’m running out of time. I love taking photos of people on the street. I know most people find it intimidating. I happen to love it. It’s not easy and it is a little weird at times. Sometimes, I even feel like a total creeper, but it’s so rewarding. It’s on the street that I find the most interesting subjects. However, I have to be in the mood. And this week, I wasn’t in the mood so I decided to go with a photo I took a little while back but have never used on the blog.

Photographers all have their idols and all have a soft spot for a particular photograph. You are probably all familiar with “Le Baiser de l’Hôtel de Ville” by Robert Doisneau. That’s my personal favorite. My aunt used to have a poster of that photo at her place in Switzerland and I would just stare at it for so long when I was a kid. It represents everything that street photography is about -spontaneity.

I have tried many times to photograph my version of that famous kiss without much success. And since I’ve moved to the United States, the opportunity presents itself even less (Americans hate PDA, right?). Anyway, I captured one of those spontaneous moments at Union Square in San Francisco. I was the passenger in a moving car and I just happened to have my camera in hand. I wish it was a little crisper, but sometimes the subject is more important than the photograph itself. At least, that’s my opinion. 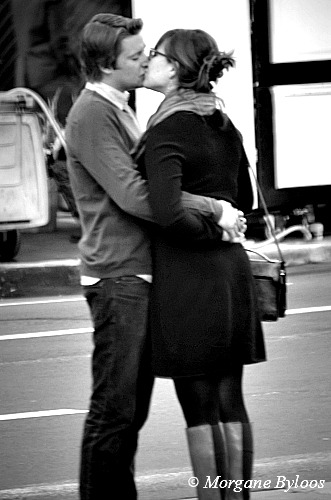 Taking you to @bigbendnps today. Jump on in!
@amistadnps 💦 🌵
Panorama of the US-90 Bridge in @amistadnps. Scroll for the full view (last image is the whole bridge) 💦
Follow morgane byloos photography on WordPress.com